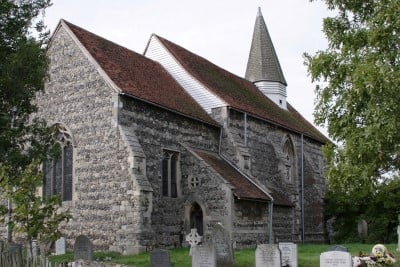 The medieval church of

S.Mary's, near the edge of the marshes bordering the river Thames, has evidence of Saxon work, although most of the fabric dates from the 13th and 14th centuries. StMary's is now 'retired' from active service (and is in the care of the

Churches Conservation Trust) but remains open daily and is well worth a visit. It contains some sine 15th century woodwork (the main door, the pulpit and the screen) Charles Dickens lived in the parish and his daughter was married there; the artist Holman Hunt was best man, still remembered for his famous painting of Christ, lantern in hand, knocking at a door and entitles "The Light of the World"

As the population almost doubled between 1821 - 1861 the hamlet around St Mary's ceased to be the centre of Higham which had gradually moved to the area around our present church of St John's, known as Mid-Higham. The Reverend Joseph Hindle, vicar of Higham from 1829 - 1874 was a wealthy man, and had St John's Church and a new vicarage built at his own expense in 1861. The church was designed by E Stephens of Lambeth and cost £2,674. It was lit by gaslight until 1957.  St John’s Church was consecrated in 1862, having been built to accommodate the needs of a growing village whose centre had moved 2 miles south from the ‘hamlet’ surrounding St Mary’s Church, on Higham Marshes, to an area near the Gravesend to Rochester Road. The move of the village centre continued over the years, with the result that, in the early 1980s the ancient parish church of St Mary’s was declared superfluous to the worshipping needs of the parish, and was taken into the care of what is now the Churches Conservation Trust. At this point St John's Church officially became the parish church of Higham with Merston, serving the spiritual and sacramental needs of a population of over 4,000 people. The village is surrounded mainly by agricultural land, with a small commercial estate in Lower Higham. Although most of the working population of the village is employed elsewhere, Higham is a thriving community. St John’s Church provides a focal point for the village, both visually and in the use of the building.

Parish of Higham with Merston